A Gunner’s View of a Bombing 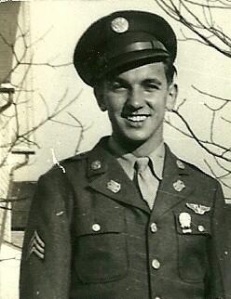 We took off on our mission early in the morning and were told our mission was to Campina, 19 miles north of the Ploesti Oil Refineries and that there was light and heavy intense flak and a possible 45 enemy fighters. We rendezvoused over the field and finally started up the Adriatic Sea. We were all very tense and with throbbing pulse, we were “Sweating it out.” We put on our flak suits as soon as the Yugoslavia coast came in sight and crawled in our turrets. We test fired our guns into the sea and soon were going inland toward Rumania. After crossing the Danube and entering Rumania there was very little talk over the interphones because the target was about 50 minutes away. At 4 minutes from the I.P. the waste gunner began throwing out chaff. I was searching for enemy aircraft when suddenly what appeared to be a P-51 came through the formation and as it passed by us I saw the Nazi insignia and recognized it as a ME109. Shortly after I saw 11 ME’s clowning at 2 o’clock high. (By this time the flak was very intense as we were on our bomb run). The ME’s peeled off in fours and attacked my position of our ship. I tried to get my sight on them but they were so close they filled the whole sight so I just held my trigger and fired into them. After 8 had made a pass I sighted another coming through the formation. I put my sight on him got my lead and fired away. He never finished his attack for his engine was throwing out a dense black smoke as he faded away down out of my sight. By this time four more ME’s made a pass the last of the four got a direct hit behind my turret with a 20mm shell which exploded and hit the bombardier as he was leaning over his bombsight. He was stunned by a piece of the exploded shell which hit his head. All nose oxygen was shot out. The pilot called bomb doors open. The bombardier control did not work so the navigator went down in the hole to open them from there. He was hit in the legs as he opened the doors. At bombs away the bombardier unconsciously pulled the bomb release. There were plenty of good hits. The flak was still intense.

Bomb doors were closed and we started back with two engines hit and the hydraulic lines shot up. We made an emergency landing at Bori, Italy to get the wounded men to the hospital. The engineer wrapped a rag around the hydraulic lines good enough to use the brakes. We landed rough but safely and returned to our home base by truck.

The plane has a 10″ dia hole behind the nose turret several machine gun bullet holes in the waist and engines. We can be thankful that it was God’s will for us to get back safely.

Scott Ranck on behalf of my Dad, The late S/SGT Glen A Ranck

Enjoying life with my wife Gayle and our Yorkie, Zoe boy. I've come to believe life begins when through brokenness I can embrace it fully and openly. I've learned the human drama is an adventure and all of us are made of the same stuff. The Lord is the only being who knows me fully and he has an individual educational plan of life long learning for me and I'm enrolled. This blog is all about what I'm learning.
View all posts by Scott Ranck →
This entry was posted in Patriotism and tagged B-24, Liberators, Ploesti, Romania, War Stories, WWII. Bookmark the permalink.

1 Response to A Gunner’s View of a Bombing